Agtech can protect your livestock, grain, machinery, and tools from sticky fingers

Australia is experiencing one of the most favourable conditions seen within the agriculture industry over the last three decades, with “prices at multi-year highs for many agricultural commodities,” according to a quarterly report released by the Australian Department of Agriculture, Water and the Environment (DAWE) at the end of 2021. Although the cost of farming operations continue to rise, such as the cost of labour, chemicals, feed, fuel, veterinary services, and so on, which has a knock-on effect on farms’ bottom-line, the “net farm cash income is forecast to be a record A$30.6 billion in 2021-22 due to much higher production and prices,” the report states. “The gross value of Australia’s agricultural production is forecast to reach a record A$78 billion in 2021–22.”

As the price and, in turn, value of livestock and grain increase, so, too, does the interest of criminal syndicates who are keen to tap into this lucrative sector. Amid sky-high livestock prices, the fear of livestock theft is very real, penetrating all farming communities, whether rural or urban. Due to the nature of the agriculture sector and soaring prices, the threat of becoming a target to thieves is very real, with four in five farmers experiencing theft of some kind in NSW alone – and this is not just limited to livestock theft. Grain and expensive machinery and tools are often targeted by thieves.

Becoming ever-craftier, criminals no longer steal large amounts of livestock at one time, but instead are opting to use smaller, more unassuming vehicles, like horse floats or caravans, to get onto and out of properties quicker and unnoticed, nabbing a smaller number of livestock. To make matters more stressful, thieves are now investing in technology, specifically using drones and tapping into satellite imagery to get a better view of livestock, crops or machinery on nearby farms.  In an interview with Farm Online, an agricultural news and media website, Crime Stoppers Victoria chief executive Stella Smith says, “It doesn’t matter if you live in a remote area, technology criminals can easily find a way to steal from you.”

While theft is becoming increasingly prevalent, it is, unfortunately, often not a one-time occurrence. Repeat victimisation is on the rise, with “three in four farmers (76.8%) being a victim of crime on two or more occasions, and almost a quarter (23.3%) experienced crime a staggering seven times or more,” according to a crime survey of farmers in NSW last year. Even though thieves may be adopting technology in their criminal behaviour, there are numerous agtech solutions you can implement on your property to enhance the security and surveillance measures on-farm – whether you’re protecting your equipment, tools, crops, or livestock.

How to increase safety and security

Aside from fulfilling possible audit and regulatory purposes, it is important to keep records of your livestock, equipment, and machinery. The more detailed information you have, the better it will be used as evidence when reported to police. Always keep these in one secure place where you can easily access your information.

Aside from being a preventative measure, livestock tracking also aids in the recovering of stolen animals. One of the more ideal ways to do this is through sheep ear tagging (part of the National Livestock Identification System – NLIS). Farmdeck has an automated counting and identification system for livestock, perfect to help you remain vigilant on your livestock count. It also removes the need to manually count sheep every few months. What makes this solution unique is that it consists of Radio Frequency Identification Devices (RFID) that is carried on ear tags. The RFID sheep ear tags are designed and manufactured by our team, and an electronic reader is installed on your paddocks’ gates. The reader captures the RFID data up to 2km, which is perfect for when you move your sheep from a paddock to another through a gate. This allows you to see exactly which sheep has gone through the gate and which sheep is missing.

Additionally, you can fit an IoT collar on one of your livestock to track your mob in real-time – no matter where they are on your farm and from any device that it logged into the Farmdeck app.

Other innovative IoT solutions, specifically for tracking livestock (and also can be used to monitor the animal’s health) is by using injectable tags, inserted into the leg or tail, or through ingestible IoT sensors or microchips. The great thing about these tags is that it makes it harder for thieves to find and to remove.

These solutions give you the ability to constantly have sight of your livestock. By knowing location, as well as number count, it mean you can take immediate action if something doesn’t measure up. 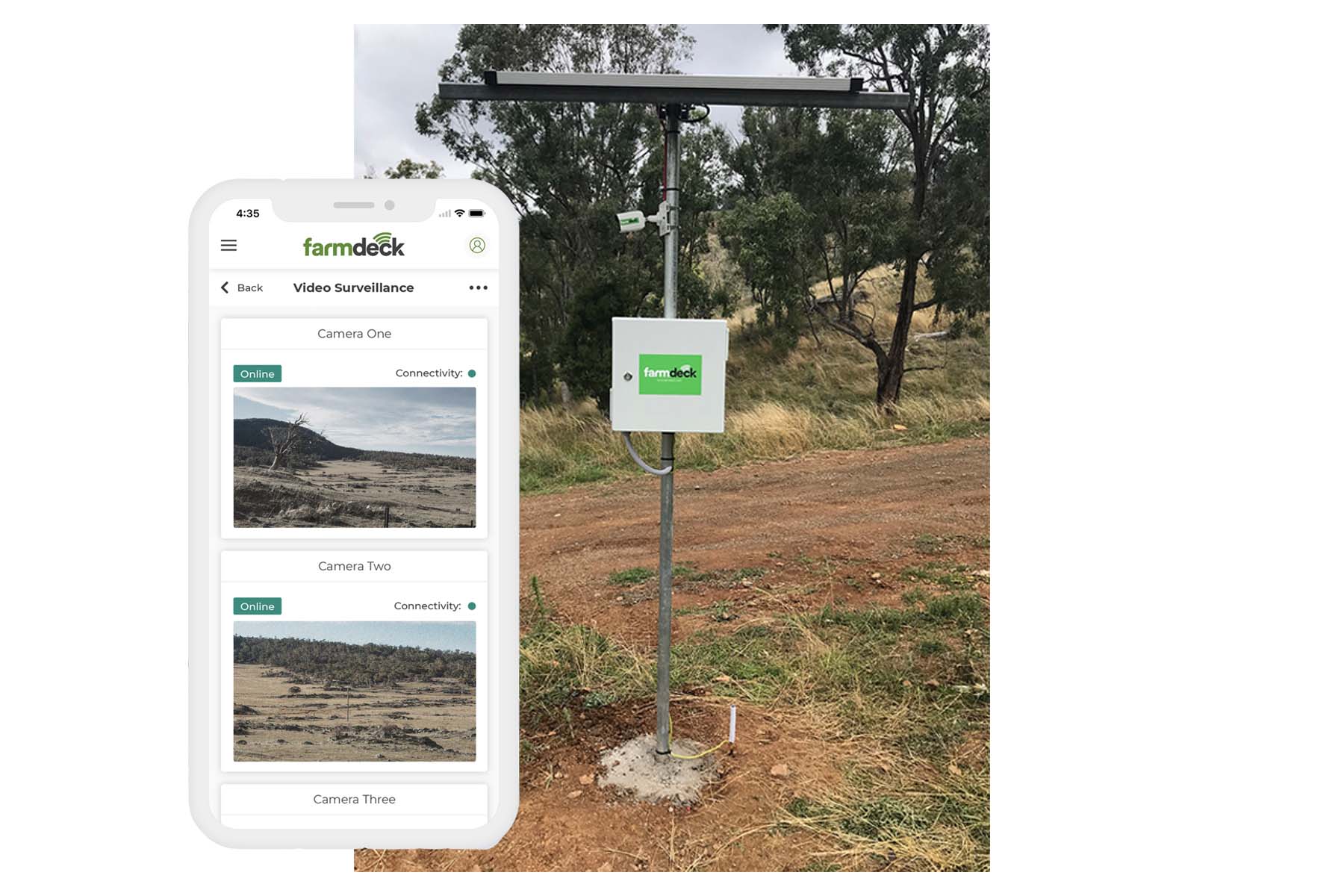 Always check that your fence lines are in good condition (whether they are electric or not) and that all gates are locked. This simple act could be a big deterrent for would-be thieves. Farmdeck has an Electric Fence feature that will immediately send you a notification if fence voltage is low. With multiple sensors on your fence line, each sensor monitors a narrower fraction of fence distance, detecting a fault by the sensor responsible for that section of the fence. Rather than having to inspect the entire fence for the single fault, you can just check the section of the fence that sent the alert. This will help you keep your livestock protected from pesky predators and stop them from wandering off.

Visible security measures are often an immense help – place these where your machinery, grain or livestock are kept or along trails to regularly monitor your livestock. With Farmdeck’s Video Surveillance feature, you will be able to view video logs in real-time. This surveillance feature differentiates movements from humans, vehicles, and livestock, making it possible to identify trespassers – along with facial and licence plate recognition, which increases the odds of retrieving the stolen assets. Along with the ability to remotely monitor your farm in real-time, you can also receive alerts for entry and motion detection for certain areas, increasing the security on your farm considerably.

Although smaller thefts are more difficult to get convictions on, the more evidence you have, the better your case will be when reporting it to the police. On the other hand, you can also help law enforcement stop criminal activities on farms by knowing what to look out for and how to report it in your state.

Crime Stoppers Victoria highlights what suspicious  practices on farms could potentially be criminal activities and what should be reported:

The South Australian police department points out several measures you can put in place to protect your grain:

From trespassing, to grain and livestock, fuel and equipment theft, farm crime costs farmers millions of dollars. In NSW alone, stolen livestock have cost farmers $22.5 million over the past five years., with these theft figures totalling more than $2.1m in VIC over 2019-2020. Between 2017 and 2019, over $3m in SA for the same time period. No matter which state you live in, you should report theft of any kind to Crime Stoppers: 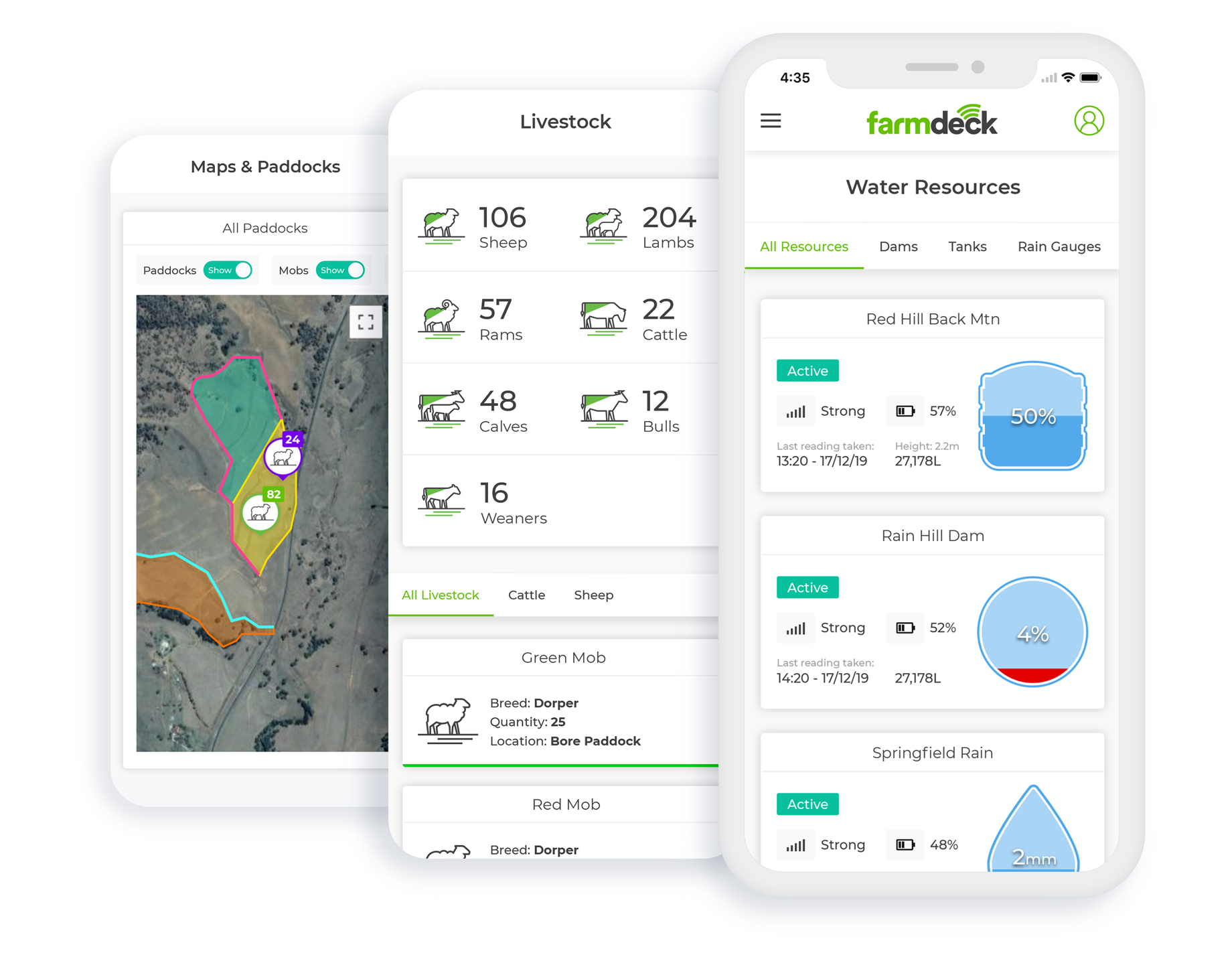 Securing your farm through IoT solutions

Let us help you secure your farm through our range of IoT solutions. Reach out to the Farmdeck team and let us create a customisable solution for your farm, meeting your unique needs and challenges.

Take a look at our Features page to view our IoT solutions and let us know if there’s something you require that’s not there. We keep adding new features to Farmdeck as we develop them and as they get requested by our customers.